It being Saturday, I slept in a bit, had a lazy breakfast, and took my time packing up to leave. Bike packed, I decided I may as well ride up to Deals Gap to see the zoo. Riding up 28, I was surprised at the lack of traffic. Arrived at the crossroads just as a group of boy racer wannabes took off, so I fell in behind them, fully expecting to get left behind. About 10 corners in, the last rider in their line lost his nerve and waved me by. I could see his ego deflating as he saw all my luggage go by. Two corners later, the next guy moved far enough towards the shoulder I took it as an invitation. By the time we got to where the photographers started, only the two lead riders were still out in front of me, keeping up a good pace. An oncoming BMW gestured for us to slow down, just in time as there was a TN trooper flagging people down around the next corner. Followed them to the overlook, turned around and had a pretty clear run back, too. A very nice way to close out the week in the area.

From there, I followed a route to Asheville a somewhat local friend suggested, which included some absolutely incredible roads. Stopped on the way for some great BBQ, then caught up to one of the more technical sections right as the food coma caught up to me. This was about when I realized riding after BBQ is much worse than riding after a couple of drinks, so I pulled aside and took a quick nap in the grass. Refreshed, I had a great run through the tight stuff, one of those roads that really reminds you how much fun great big gobs of torque can be. Eventually got to the Blue Ridge Parkway, but I’d silenced the overly-talkative GPS so I accidentally got on going the wrong direction. Realized my mistake immediately, pulled into the first overlook I passed, and after taking a few minutes to walk around and replace a burnt out headlamp, decided to continue on the wrong way to the end. Beautiful road, I don’t regret a second of it.

Arrived in Asheville around 2030h, settled in, cleaned up, then headed downtown to meet folks for drinks. Had a great time, closed out the place. 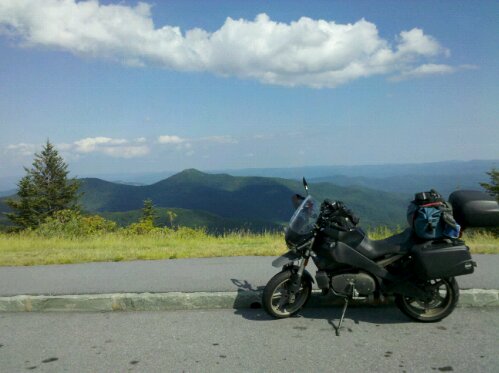